The Ice Steed is more powerful than a fire steed, it can cast spells and deals more base physical damage. It deals mainly cold damage and on occasion has a lower fire resist. But better overall resists and uses 3 control slots.

The ancient nightmare is a more advanced version of the normal nightmare and it has a seriously strong physical attack and deadly magery skills. Spawn rate and location TBC

A once wild stallion this rare breed of ancient horse surpass normal horses in intelligence, dexterity and strength

A once lovely horse this awful smelling foul beast of a steed is now a rotting corpse.

Male and Female Variants of horses which are known as Stallions and Mares. There are various versions of these which will be further detailed in the near future.

Stallions – are higher in strength

Each of these Stallions and Mares can spawn in four different varieties as well as rarity colours.

The Physical Stallion and Mare are just a stronger version of the standard horse with a chance to spawn in with a stunning black coat.

Black Fire Beetle – Added to Solen Hives in Felucca as a rare 1 – 2 day respawn! See below screenshot for an example of its wild stats. 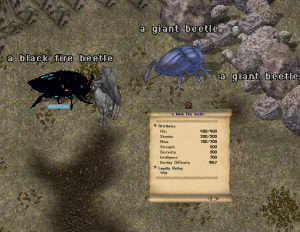