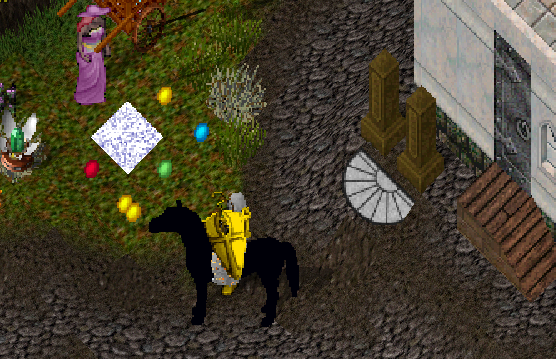 So you may be wondering why I’m posting an Easter quest screenshot…. well the good news is FINALLY we’ve fixed the bugs in this quest. To accomplish this all older style eggs have been globally removed. We do apologise if you’ve lost any but this was essential to fix the quest bug.

The new eggs allow you to split the stack to 15.

As above this quest has now been fixed the area around Carrie has also been decorated with examples of the new style of egg for the quest!

Now instead of one spawning up to three can spawn with now more brigands in the area. The quest requires you to slay 5 werewolf’s now instead of one and you will be rewarded with a larger gold amount.

New quest – Rarity Collector – You can also collect werewolf eyes which are a 10% drop and 10 will reward you with a custom artifact. 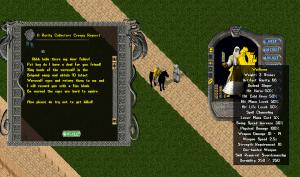 Introducing – The Ice Cu Sidhe – a new custom tameables which spawns every 2 – 3 days in felucca near the ice dungeon and Loki quest. 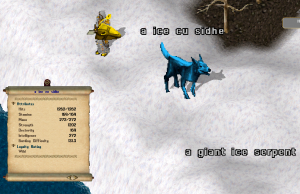 Introducing the Mare and Stallion new custom tameable pets that will be classed as rare spawns.

Example of one of a pair of them which spawn every 1-2 days on top of fire dungeon area felucca. 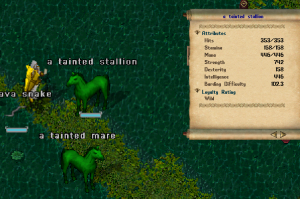 Powerscrolls have been removed from all token stones as we felt they were too easy to obtain and this will help improve the value of them in trading and help with the overall economy of the server.

Vice Vs Virtue – Has been disabled.

We have made this decision based on multiple factors such as multiple accounts being permitted. How easy it is to obtain silver it and can then devalue existing content, artifacts and also the shard economy.