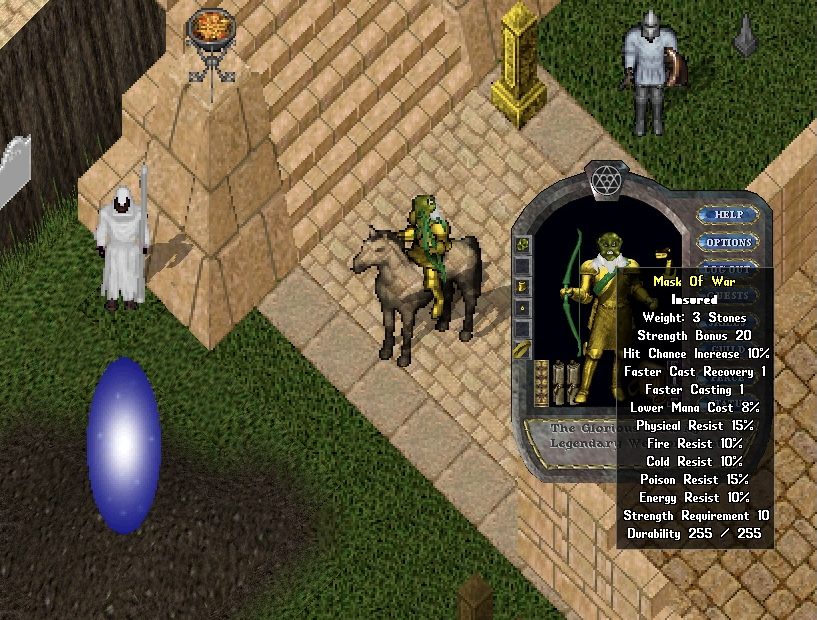 Joy helped decorate Age of Britannia and was our first volunteer shard artist and friend of Aj, To celebrate Joy we will be offering custom flower decorations for sale on a new vendor that will soon appear in Luna TBC. Every June and July each year every single donation will go directly towards a charity chosen by Aj to show our support and compassion to our friend – Joy

We will also look to create a event page for Joy each June / July and create bonus events and custom decorations for our community.

Joy the Joyful NPC in Luna near our Shard Hall pays respect to Joy and a custom decoration shop will soon be built here!

Every June / July we will be running events to celebrate Joy and compassion for our friends.

Fixed issue during character creation where when selecting specific starting professions you would not be given new player starting armour.

New Player starting gear stats have been improved however the gear has now been limited to the equivalent of a full week in minutes. The decay timer can be paused by removing the armour. After the full week of minutes the armour will decay and the player will be forced to fend for themselves. ALL newly created character’s human, elf or gargoyle will receive this newbie starting gear.

Necromancy and Chivalry books will no longer be automatically given to all new starting players only when they choose it as a profession. Some other starting items have been removed to declutter backpacks following player feedback.

2 Accounts per IP restriction re added.

Fortune Bow Set – Only currently available as a drop in the Doom Gauntlet.

Mask Of War – Only currently available as a drop in the Doom Gauntlet.

Loki – Disguised as a normal monster only upon slaying it will you reveal its true form! Also drops unique artifacts

Ice Kraken – A unique custom Kraken that has a chance drop some custom artifact gauntlets.

A new set of custom tameables are being introduced to Age of Britannia will soon be available.

A Demonic Steed is a 5 slot 0 taming non trainable pet designed as a champion spawn helper spawn location to be confirmed.

Tina Tyrannosaurs Rex – Defeat this beast of a T. rex for a decent chance at a reward

Lich’s have a chance to drop Lich staff parts collect all 3 to build a custom artifact!

Lich Lord’s have a better chance to drop Lich staff parts collect all 3 to build a custom artifact!

More photos and information regarding August updates will be posted here soon!

ALL shard monster loot packs improved! Shard monsters can now drop the Britannic Armour set a NEW and UNIQUE set of armour which exclusively drops only on Custom Shard Monsters such as Beorn, Smaug and Ologhai for example. The harder the shard monster generally the higher chance at dropping!