Aj has been busy building content on the server as well as working on new maps for release in the near future.

Arcane Circle has been tweaked to allow one person to cast it rather than 2 people. The level of crystal that can be obtained has been increased so you can now achieve maximum focus which wasn’t possible before.

The New player dungeon and training elementals area has now been improved. Weapons and shields now spawn on the tables in the new player dungeon ready for anyone to take. They will be automatically replenished! 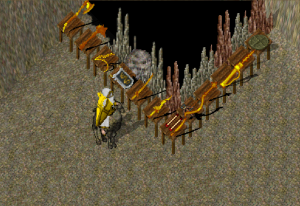 Aj has also added one of the new bandage stones in the new player dungeon and a new NPD guide who when standing near with give some basic information and guidance around the area.

The kindling stones which can be seen in the photo below are more so there for a reminder for players that they can use kindling to make campfires which can then be upgraded which then gives the player a buff to their stats for approximately an hours time. This buff does stack with bless! 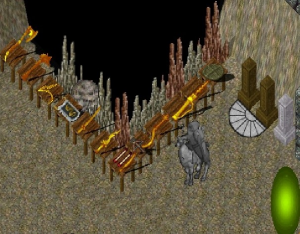 The website is now linked to our social media accounts and players can now like our homepage and find us on Twitter using the bottoms in the footer of the website. We have also done some shard advertising on Reddit and other areas.

One last thing….. VOTE VOTE VOTE – Please remember by voting daily and showing support encourages more players to come and try out the shard! Thanks for continuing to play and supporting our server – Aj